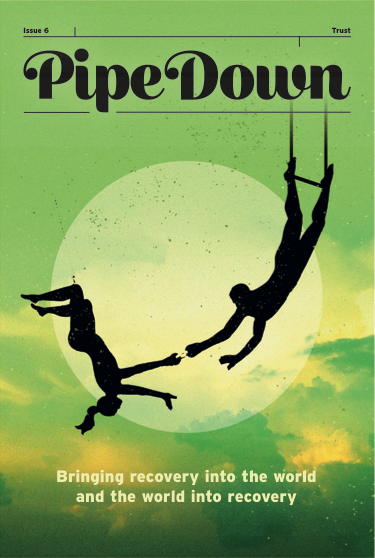 You can download Pipedown Issue 6 by clicking on this link.

This is what I wrote:

At the end of last year a very close friend of mine took her own life. She was 26 years sober from substances, a devoted and long-standing yoga practitioner, a committed and active 12 Step fellow; she was a pioneer in addiction recovery. Yet in our conversations during the last few months of her life, my friend was adamant that what her doctors had diagnosed ‘psychotic depression’ was not that at all. Rather it was, in her words (or one word, actually): “Addiction”. Knowing her as I did, I had agreed. And in the light of this heart-breaking experience, I would like to explore why we both felt that addiction was at the root of my friend’s unwellness, despite being ‘clean’ from drugs and alcohol for almost three decades.

Anorexia nervosa and sex & love addiction are considered ‘process’ addictions in therapeutic models widely regarded within the addiction recovery community. One involves food; the other involves emotional relationships. Money presents a third significant process addiction, which also displays similar patterns. You could argue that most people have a certain degree of dysfunction around food, money and relationships. However, general imbalances around eating too much or too little, and to what extent compulsive sexual behaviour is used to act out or mask deeper underlying personal insecurities, fall on a scale that stretches widely from functional to highly dysfunctional. Someone who identifies as ‘addicted’ around food or relationships would certainly put themselves in the dysfunctional range. For us, we were powerless over our addiction and our lives had become unmanageable.

The term anorexia also relates to sex and love addiction, bearing no relation to what a person eats, but to the way in which they repeatedly and compulsive not do something that could be emotionally nourishing, for example – not enter into intimate relationships, not commit to their partner, not have close friendships, not take risks around being vulnerable, and in some cases substitute intimacy entirely for either sex or sugar, or both. Anorexia is a critical aspect of sex and love addiction. It is the ‘starvation’ aspect of the disease – one that involves extreme control or denial in the way we relate to others. In recovery, a sex and love addict may challenge this compulsive ‘not doing something’ in his or her relationships with everyone.

Recently I have likened sex and love addiction to a pack of playing cards, each card representing a different behaviour that I can ‘play’ or ‘act out’. There are 4 suits – love addiction, sex addiction, love avoidance and anorexia. Each suit holds 13 individual cards, which represent specific addictive behaviours. To extend the analogy even further there is a ‘value’ or ‘rank’ of compulsive behaviour. Low card numbers represent relatively normal actions that would keep the game in play. In my case these included becoming involved with someone too quickly, or not being able to leave them, even when I wanted to. From my avoidant suit I used intrigue to keep people engaged yet held at an arm’s length. Royal cards were my classic moves – handing over half my assets only 6 months into a relationship, for example. That was certainly a royal move. Aces were even more extreme than that. Often from the avoidant suit, I played trump cards that left me and/or my partners reeling, and my family and friends scratching their heads.

When I picked up sex and love addiction, I played with a full deck, which before I hit rock bottom 12 years ago, had me punching myself in the face and banging my head against the wall. From the tortured confinement of a floor from which I thought I would never be able to get up, I learned that there are no winners in the game of sex and love addiction. This is a pack of cards an addict need never pick up again.

Recovery from sex and love addiction (like recovery from eating disorders) can be baffling and confusing. Unlike substance recovery when the recovering addict puts down drugs and alcohol, just for today, recovery from process addiction means learning to re-engage in a healthier way. During the process of re-engagement in relationships, usually after a period of defined abstinence, we go back into familiar territory with the aim of doing things differently. It’s not black and white, not like going into a pub and ordering a mineral water instead of beer. Recovery from sex and love addiction ironically, really is 50 shades of grey.

Every recovering sex and love addict that I have known, without exception, has struggled to re- engage healthily. I hit on the playing cards analogy when it dawned on me recently that although I had changed my behaviour in relationships, there was something energetically still linking any new encounters to those pre-recovery. For all my wellness, encounters with potential lovers or partners could still feel intense, regardless of our physical interaction. And I wondered… Was I trying to play with the same pack of cards, but in a ‘healthier’ way?

This was when I realised that it’s more to do with energy than the actions themselves. Does this encounter set my heart racing faster? Did a flirtatious comment make my stomach flip? Do I have butterflies when that text came in? If physical conditions change as a result of a shift in emotional / spiritual / energetic change, and assuming that emotional recovery depends upon an emotional change or transformation, I knew that I had to find an entirely new game. I needed to play with a deck that had ‘Serenity’ written on the back, rather than ‘Intensity’. It’s been a useful guiding post for me ever since; does this feel intense or serene?

To focus on feelings as a spiritual guide naturally plays out into the physical actions that I then take. I mean, a text message is a text message, right? It’s the feelings that the text message evokes where true emotional recovery lies. I recently found myself verbally willing a text from a man I thought could possibly be a potential partner to not be intense… “Don’t flirt with me!” I was pleading to him via my higher power as I heard my phone ping. Phew – he wasn’t. Maybe this one had potential! The ‘spiritual awakening’ was to place ‘Serenity’ at the heart of all relationships. This was a power greater than myself, restoring me to sanity…

Tragically there is a long way to go in the field of emotional addiction and recovery. I say tragically because many people lose their lives from the harsh effects of living with unresolved emotional addictions. Either that or they become the walking dead, relentlessly numbing their emotions with the many opportunities that society offers: another hour of Netflix or IG, another screen encounter with an anonymous profile, pharmaceutical solutions, or even a bag of pick-and-mix to ease the pain… the list goes on. We all have our ‘thing’ that we can use to take the edge off; to create an illusion or inject a little intensity into what would be uncomfortable otherwise.

The 12 Step model has been an incredible source of recovery for millions of people around the world, and academics have done valuable work in establishing a clearer understanding of why certain behaviours develop from traumatic neglect during formative years. Addictive relationship patterns are picked up in early childhood; medications for traumatic events, which create complex neurological pathways that seem impossible to change. However, there is still a huge and undiscovered gap, which we must face in terms of how we relate to each other in 21st century society. This gap, I believe, is a spiritual one.

No one wants to face their demons. They are unpleasant and scary and murky and dark. Yet, if not faced head on, negative internal processes continue for years, until one day, boom! The pressure becomes too much, and no amount of prescribed medication or abstinence can resolve it. This is real. I’ve witnessed it first hand. And it’s a heavy loss to bear.
“Come to believe”, I would urge my friend on. “Come to believe that a power greater than us can restore us to sanity…”
“I can’t believe any more,” she would say. “I’ve lost it. I’ve lost my spiritual connection…”

I believe that now is the time for the recovery community to take fresh bold steps into relatively unchartered territory that is essential for both our individual and our collective emotional health. A spiritual malaise, which beats at the heart of digital communications, might not only fuel our image conscious, avoidant, fantastical, obsession driven attitudes, it could also threaten the essential roots of our connection with self and others.

Yes, it will mean facing our demons. And there will certainly be some dragons to slay. It definitely won’t be sexy, and it might not be that pretty either. But it will be real. And we will have each other. So together, let’s all take another step forward.

Read more about our Services.